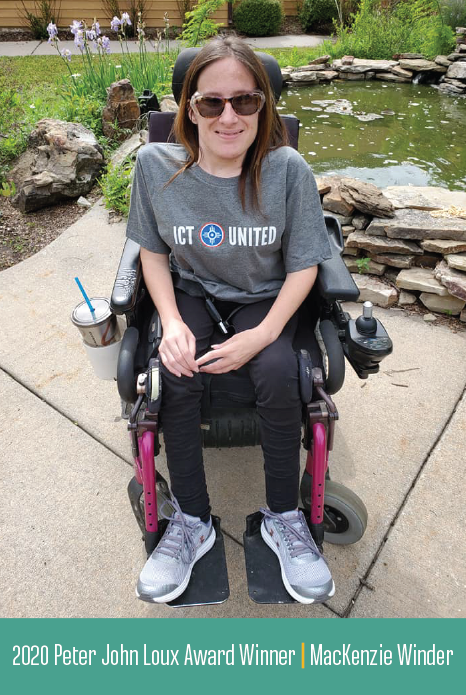 “MacKenzie is a joy to be around.”
—Amy Terrill | Teacher

MacKenzie Winder has never let a world of inaccessibility define her potential.

MacKenzie was born with spina bifida and she underwent 18 surgeries in the first 18 years of her life. She has hydrocephalus (water on the brain), two shunts and a severe curvature of the spine, which resulted in her having to wear a very hard, durable brace from the age of 2 until she had major back surgery when she was 11 years old.  She had a feeding tube for several years. Now, she periodically undergoes a procedure to have her esophagus stretched.

MacKenzie moved to Wichita nearly five years ago, with some convincing from a friend she moved into The Timbers, which is three hours away from everyone she knew and her familiar hometown. She bravely took a chance on living independently in a new, much larger city while searching for a job.

“Since graduating from high school and moving on to Wichita, I and all of her small town are sad to see her go, but realize that she is destined for great things.”
—Dave Van Schuyver | President of Solomon Valley ARC

The job search was challenging, but it was no match for MacKenzie’s ambition and patience. While working with CPRF’s Job Placement team over the span of almost two years, she applied for over 150 positions and attended roughly 30 interviews. She never gave up and always kept an open mind in her search. Employers were not offering opportunities for her to demonstrate her potential. Then in the winter of 2018, an position opened up at Center Industries Corporation (CIC), a CPRF affiliate organization. CIC understands the value of having a diverse workforce, and hiring people with disabilities is a part of that mission.

Linda Oxford, CPRF Director of Job Placement, negotiated a Community-Based Job Try-Out. In the window frame production department MacKenzie cleaned and inspected aircraft window frames by sight and touch, ensuring they were prepped for their next step in production. She strived to increase her production quantities during the try-out, setting a personal goal of 40 window frames per four hour shift. She surpassed her goal, and was offered a permanent position halfway through her trial. MacKenzie has been in her role at CIC for two years now, playing an integral part in production quality assurance. She still loves her job, and her independence of living at The Timbers, with her dog, Izzy.

“When once I thought she would live with me forever and now she lives three hours from me, on her own, it seems unbelievable still. She now has a part time job which she loves, a boyfriend that she plans to marry, and many friends where she lives.”
—Kelly Schmidt | MacKenzie’s mom

We at CPRF are honored to present MacKenzie with the 2020 Peter John Loux Award.