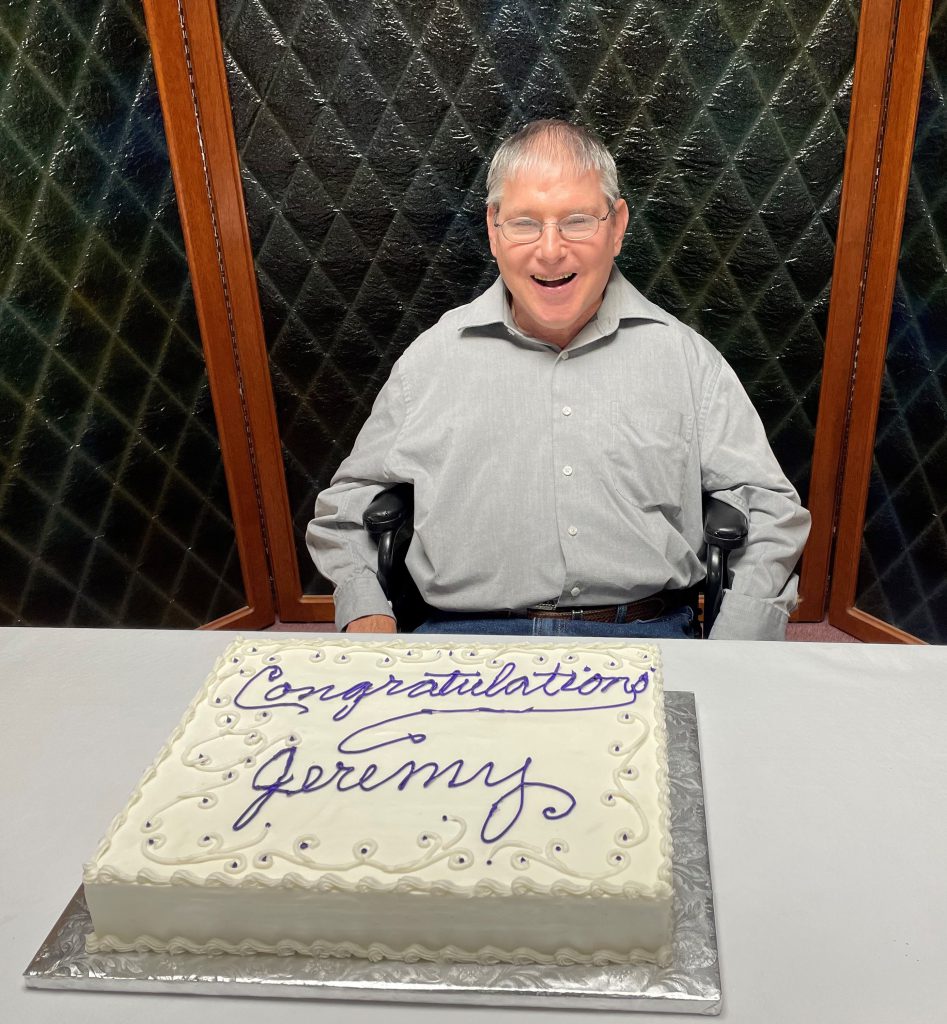 Jeremy Briggeman is loved by the Pratt community.

Jeremy was diagnosed with cerebral palsy at nine months old. Jeremy spent most of his childhood on a dairy farm near Iuka with his parents and siblings. He started using a walker when he was four, but a wheelchair was ultimately a better fit for his mobility and balance.

Bob and Nancy, Jeremy’s parents, always felt it was important for him to learn how to do things on his own, even if it wasn’t the easiest option. His dad adapted and created ways for Jeremy to participate in farm chores, which helped Jeremy develop a strong sense of independence. He was eager to play his part in daily routines — feeding baby calves, riding tractors, and mowing.

Growing up in a small, supportive community and attending school in Pratt was essential to Jeremy’s education. He was a natural in his small engine mechanics class and helped manage the Pratt High School basketball team. He is still a loyal Greenbacks fan to this day and rarely misses a home game.

After high school, Jeremy attended courses in Wichita to learn independent living and vocational skills. Afterward, he was employed at a sheltered workshop in Hutchinson, but ultimately decided he wanted to settle down in Pratt.

Back home in Pratt, Jeremy started working at RR Creations, using a computer-aided design (CAD) program to draw replicas of buildings used for screen printing on woodcuts. With his knowledge of CAD, Jeremy created ramp designs for his home. After RR Creations closed, Jeremy contracted with the City of Pratt and the South Central Kansas Special Education Cooperative to provide mowing services.

Assistive technology and computers shaped many parts of Jeremy’s life. His screen reader has expanded Jeremy’s ability to learn new and enjoy new things. Through a computer program set up by his brother, Jeremy also manages his finances independently. Opportunities and access to technology have been integral to his self-sufficient lifestyle.

Jeremy’s determination and unwavering desire to learn and adapt throughout his life earned him the 2021 Peter John Loux Award.

This annual $1,000 award is presented to a Kansan with a disability who has shown determination toward their employment and educational goals, community activism, personal achievements, and more.

The Peter John Loux Award is an endowed gift established by the late R.C. “Pete” Loux in memory of his son, Peter John, who was fatally injured in an auto accident. Pete Loux was a lifelong advocate for people with disabilities, using his influence as minority leader of the Kansas House of Representatives to help Center Industries Corporation, the nation’s first manufacturing facility to provide competitive employment for people with disabilities, secure its 1975 inaugural contract to produce Kansas license plates (a contract CIC still holds). Mr. Loux also served on the CPRF Board of Directors from 1972-2004.

It is with great honor that CPRF administers this award on behalf of Mr. Loux in memory of Peter John.