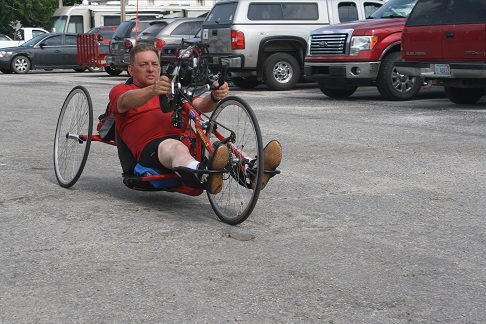 462 down, 96 to go! Robert rolled into Fredonia this afternoon, and he’s resting and gearing up for his next to last stop: Arma.

Robert is averaging about 35-40 miles a day, sometimes more, on his handcycle as he participates in Biking Across Kansas to raise money for CPRF’s Equipment Fund. With his long-time friend Sheldon acting as his support crew, Robert is making his way across the hills and flatlands of the state using only his arms.

Robert Hammer has cerebral palsy that affects mobility in his lower body, which causes discomfort when walking or performing other standing postures. Despite his limited mobility, Robert has always been passionate about the benefits physical fitness and activity for people of all abilities. In 2008, Robert completed the Salty Dog Triathalon in Hutchinson, which included a 400-meter swim, a 10.5-mile bike ride, and a 3.1-mile run. Robert overcame his physical barriers and not only finished the race, but beat his previous personal record.

These days, Robert mainly sticks to handcyling – a type of biking that requires the user to sit on a recumbent seat and pedal with his or her arms. Needless to say, handcycling is difficult. To cover 30-40 miles on a traditional bike would be a lot of work for most of us, but to cover that much ground in the June heat using only your arms would be extremely difficult, regardless of physical ability or training.

Robert first came to CPRF in 2012 to propose his first fundraising ride: a 53-mile ride from Hutchinson to Wichita to raise money for CPRF’s Exercise & Wellness Facility. Robert’s fundraiser generated more than $10,000 toward the purchase of brand new equipment, including a stationary handcycle, for the program.

This time around, Robert is doing 558 miles and is hoping to raise $20,000 for CPRF’s Equipment Fund, which serves Kansans with disabilities throughout the state, offering financial aid toward the purchase of assistive technology and medical equipment.