The United Way Wall of Fame 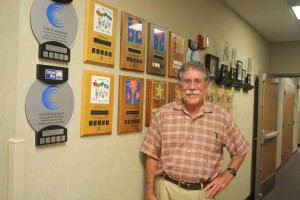 Ever notice the hallway wall just past the receptionist’s desk in CPRF’s Administration Building? It’s loaded with United Way campaign awards received by CPRF, BTCO, and United Cerebral Palsy employees. The awards currently displayed date back to 1987; however, CPRF and UCP have won United Way awards since the late 1970s.

For at least the last 30 years in a row, our organizations’ employees have won the United Way’s Pinnacle Award for employee contributions, which is only given to companies that surpass their determined potential for giving (based on an overall payroll formula).

Thirty consecutive years is quite a record! This past September alone, CPRF, BTCO, and UCP pledged a combined gift of $37,076 to United Way. If we add the $34,730 contribution from the generous employees at Center Industries Corporation, our total gift for 2016 comes to $71,806.

Several other special awards have recently been added to this wall of fame as well. Each year, United Way of the Plains gives its highest honor, the Spirit of Caring Award, to only four companies in its multi-county region.

Although recognition is nice, I believe the major reason for our staff’s consistent generosity is that we get to witness firsthand how United Way impacts the lives of those we serve every day.

Thank you to everyone who supports United Way. You truly make a difference.