In the early 1970s, young people with cerebral palsy were emerging from private educational programs, but they had nowhere to go from there. Working for one of these programs as a speech pathologist and audiologist, John F. “Jack” Jonas Jr., CPRF Founder, realized that the need for continuing services was critical.

YOUR DONATIONS MAKE IT POSSIBLE 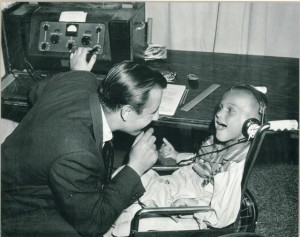 When Jack started working with children with disabilities as a speech pathologist and audiologist at the Institute of Logopedics in the 1950s and 60s, having a disability generally meant that you were destined to either live in a nursing home or with your parents. Employment, inclusion, and independence were not options for many people.

Jack moved on from his field of study to become Executive Director for United Cerebral Palsy of Kansas in the early 1960s, during which time he learned that his former speech pathology and audiology students from the Institute were unable to get jobs, and since wheelchair-accessible, independent living wasn’t available, they were either sent back home to their parents or went to nursing homes. In addition, children who didn’t have a chance to attend the Institute of Logopedics had no access to proper educational funding. So with the help of lifelong friend and classmate, Daniel M. Carney, Chairman of the Board, Jack started the Cerebral Palsy Research Foundation of Kansas in 1972 with a mission to help people with disabilities get the education to which they have a right, a job to pay the bills, and a home to call their own.

The fight for educational inclusion wasn’t easy, with dissent coming from legislators and school administrators alike; however, with the help and strong words of Richard C. Loux, then Minority Leader of the Kansas House of Representatives, Jack was able to get the Kansas Special Education Mandate approved three years before the federal version. 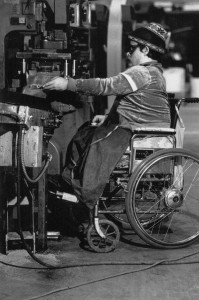 In order to accomplish the employment aspect of the CPRF mission, Jack opened Center Industries Corporation, a manufacturing company that hires people of all abilities at competitive market wages, in 1975 with a contract from the State of Kansas to create license plates.

Four years later in 1979, construction was completed on The Timbers – a 100-unit apartment community built to suit people who use wheelchairs. It was the first U.S. Housing and Urban Development property in the nation of its kind. For the first time, people with disabilities had the opportunity to live on their own in a space that was suited to their needs.

Jack also searched for a way to create a white collar alternative to Center Industries for people who preferred technology to manufacturing. In the late 1990s, Dan Carney introduced Jack to Patricia and Bob Patterson, who assisted him in creating CPRF’s newest affiliate organization: Business Technology Career Opportunities, Inc.

Jack retired in 2000, but remained active as President Emeritus and Board of Directors member until his death in 2014. 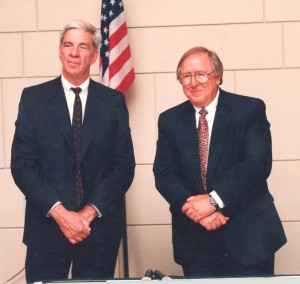 With the help of an entrepreneurial and generous Board of Directors, a dedicated staff, individual donors, multiple federal and state grant programs, and significant legislative support, Jack positioned CPRF to create many opportunities once denied to his former Institute of Logopedics students and people with disabilities throughout Kansas.

Corporations like the Boeing Commercial Airplane Group, Koch Industries, Raytheon Aircraft, Cessna Aircraft, and foundations such as the J.E. and L.E. Maybee Foundation, the Kresge Foundation, the William T. Kemper Foundation, and the Fred C. and Mary R. Koch Foundation have also greatly supported CPRF in our efforts to make independence a reality for people with all types of physical disabilities.