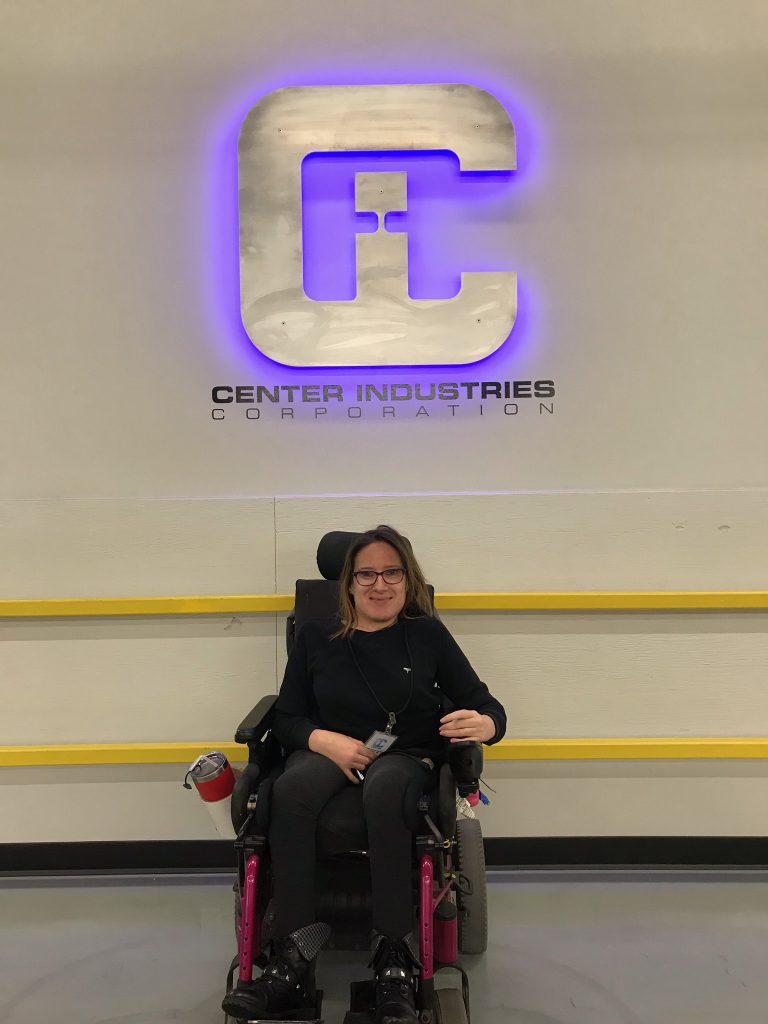 MacKenzie is a 27-year-old Smith Center native who made the solo move to Wichita nearly 3 years ago. She was recruited to The Timbers from a friend who lived in the apartment community, but MacKenzie has been a long-time client at CPRF’s Wheelchair & Posture Seating Clinic. With some convincing from her friend, she decided to give independent living a shot, with goals to gain more independence and to increase her chances of finding a job.

She took to Wichita and The Timbers right away. Coming from a small town, MacKenzie loves having a community of younger residents close to her age and being able to explore what Wichita has to offer. She loves going to the movies, doing wine and painting workshops, and is active in the Special Olympics.

“I thought, I could have fun here… I’m really big into Special Olympics, and back home they only did bowling and basketball, so when I moved here, that’s actually the first thing that I did—find a track and field team,” said MacKenzie.

“I just liked how wheelchair accessible everything is because everywhere else that I’ve lived, it’s not exactly that way. I like that I’ve got people more like me, per se, because I’ve always been more comfortable around people that I feel like are in my situation,” she said. “Since I’ve moved here, we have had four or five people closer to my age move in, which is nice for me. And most of them have my disability, so that’s also really cool.”

MacKenzie’s job search, however, ended up being more difficult than settling into The Timbers, lasting for two years before she landed a job that suits her.

She knew that she needed a position that was part-time, and wanted something that was hands on, involved responsibility, and (by her definition) was not a stereotypical job for a person with a disability.

After going through orientation with Vocational Rehabilitation, MacKenzie began working with Linda Oxford, CPRF Director of Job Placement , to complete employment applications, practice interviewing, and develop her resume. During her stretch of time in the program, MacKenzie went on 25-30 job interviews in various fields of customer service, general office, and manufacturing. She kept an open mind about all the possibilities she applied for, but she got discouraged as the search continued with no viable options.

MacKenzie explained that even though the process was lengthy, and it was easy to get discouraged, Linda was always a great source of support. “She made it fun,” MacKenzie said.

In the winter of 2018, MacKenzie came across an opening at Center Industries Corporation, a CPRF affiliate organization. She had toured Center Industries in the past, and though skeptical of her chances, she inquired about the position. “I did not think it was an option at all,” she said, explaining that she had heard most positions were full-time roles and the possibility of a part-time opening was rather uncommon. Linda negotiated a Community-Based Job Try-Out at CIC on MacKenzie’s behalf so she could try the job on for size. A Community-Based Job Try-Out is an important incentive CPRF offers potential employers and potential candidates alike, allowing both parties to make sure the job is a good fit, at no commitment or expense.

MacKenzie’s trial run was in the window frame production department. She was so successful that midway through her 80-hour trial, CIC’s Human Resources manager and the Window Frame manager decided they wanted to offer MacKenzie a permanent position.

MacKenzie has been a permanent employee for a little over a month now, and she loves her new job. Working in frame production, she does detailed cleaning and preparation on Spirit airplane window frames, getting them ready for the next step in production. She says the work day goes by quickly, and she likes her supervisor and coworkers. Even though her section does not have production quotas, MacKenzie makes it a point to set a personal one of prepping 40 window frames per day.

Most of all, MacKenzie appreciates that Center Industries gave her a chance to prove herself and that they value employees with disabilities as part of their mission.

As for the job search process, her advice is this:

“Be patient. Be super patient. I’m kind of a stickler for everything happens for a reason, even though you might not know it…don’t get frustrated.”